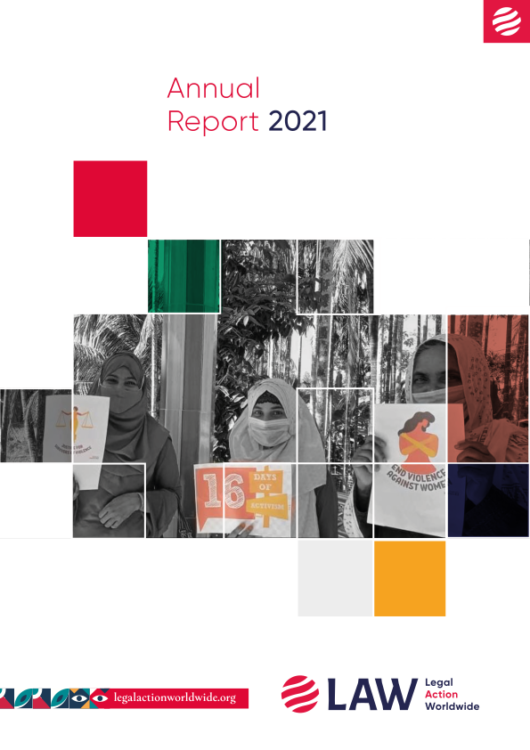 I am very pleased to introduce LAW’s new annual report. 2021 was an extremely busy but incredibly rewarding year for the organisation. I am so proud that despite ongoing COVID-19 disruptions and the increasingly difficult contexts we work in, our teams continued to bring help, support, solidarity and hope for justice to victims and survivors of human rights violations and abuses.

Every year, I am in awe of the courage and determination of the people who have been subjected to the worst forms of abuses and discrimination, and of those who have witnessed human suffering and are standing up for men, women, and children who have lost their lives or are not able to seek justice themselves. They are the former migrant domestic worker who is bringing the first criminal case on slavery and slave trading in Lebanon; the 500 Rohingya and 41 Syrian refugees who are challenging the International Criminal Court to act for unpunished international crimes; the hundreds of victims and survivors of sexual and gender-based violence, including children, across our countries of operation who are taking legal action and calling for justice; they are the families of the victims and survivors of the Beirut port explosion who refuse to give up on their search for the truth and accountability. Last year, we represented more than 750 clients, and reached 30,000 people through our legal aid and empowerment work.

We also stepped up our advocacy efforts, amplifying the voices and experiences of victims and survivors, and providing them platforms to tell their stories to national and international decision makers. We elevated discussions and raised awareness of critical human rights violations and abuses and the need for accountability, including on the Beirut port explosion and war crimes committed in South Sudan and Myanmar. We raised the profile of several critical issues and crises through public events including during the 20th Session of the ICC Assembly of State Parties and we contributed to fostering the need to step up action for children detained in Syria and for Tigrayans. We published compelling resources on the impact of enforced disappearances on children in Syria and through high level events, put the spotlight on overlooked human rights abuses against marginalised groups, including members of the LGBTQI+ community.

Working with our diverse teams in the field, 38 local partners supported victims and survivors through legal aid and representation. We also continued to build the capacity of justice and legal actors, including civil society organisations, advocates and national and local authorities to address systemic human rights violations.

2022 promises to be another exciting year for LAW, with new initiatives and projects starting, more staff joining us to step up our legal, advocacy and communications work, and some new and important cases being filed, including our first communication to the African Commission on Human and People’s Rights on behalf of Tigrayan victims and survivors.

I want to thank everyone that has contributed to our work in 2021: LAW staff and Board, our advisory committee, partners and donors, without whom none of our work would be possible.