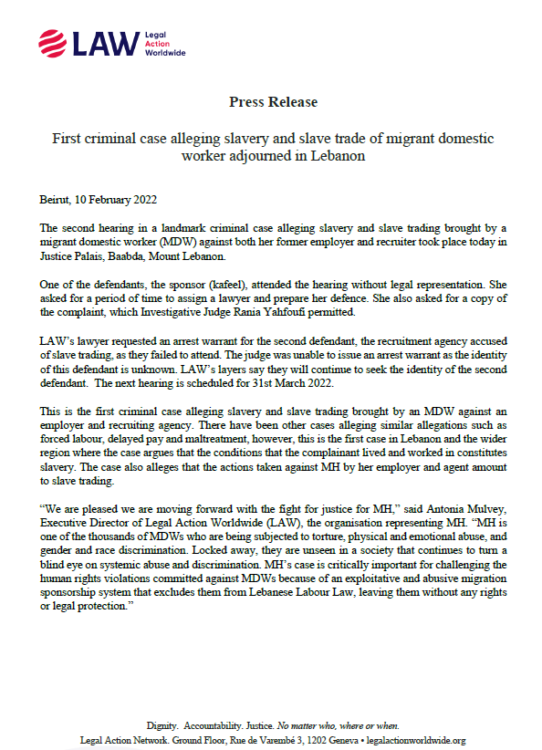 The second hearing in a landmark criminal case alleging slavery and slave trading brought by a migrant domestic worker (MDW) against both her former employer and recruiter took place today in Justice Palais, Baabda, Mount Lebanon. One of the defendants, sponsor (kafeel), attended the hearing without legal representation. She asked for a period of time to assign a lawyer and prepare her defence. She also asked for a copy of the complaint, which Investigative Judge Rania Yahfoufi permitted.

LAW’s lawyer requested an arrest warrant for the second defendant, a recruitment agency, the recruiter accused of slave trading, as they failed to attend. The judge was unable to issue an arrest warrant as the identity of this defendant is unknown. LAW’s lawyers say they will continue to seek the identity of the second defendant. The next hearing is scheduled for 31st March 2022.

This is the first criminal case alleging slavery and slave trading brought by an MDW against an employer and recruiting agency. There have been other cases alleging similar allegations such as forced labour, delayed pay and maltreatment, however, this is the first case in Lebanon and the wider region where the case argues that the conditions that the complainant lived and worked in constitutes slavery. The case also alleges that the actions taken against MH by her employer and agent amount to slave trading.

“We are pleased we are moving forward with the fight for justice for MH,” said Antonia Mulvey, Executive Director of Legal Action Worldwide (LAW), the organisation representing MH. “MH is one of the thousands of MDWs who are being subjected to torture, physical and emotional abuse, and gender and race discrimination. Locked away, they are unseen in a society that continues to turn a blind eye on systemic abuse and discrimination. MH’s case is critically important for challenging the human rights violations committed against MDWs because of an exploitative and abusive migration sponsorship system that excludes them from Lebanese Labour Law, leaving them without any rights or legal protection.”

If successful, LAW believes MH’s case could set a legal precedent in Lebanon and throughout the Middle-East, potentially opening the door to legal redress for the many thousands of other MDWs who are held in similar conditions.

LAW hopes that the case will ensure that other perpetrators of this kind of treatment will face charges and punishment commensurate with their crimes. And believe the case highlights the widespread and egregious crimes that are committed under the banner of the notorious kafala system, which could deter future violations of this nature.

According to a recent assessment by the International Organisation for Migration, there are approximately 400,000 migrant workers in Lebanon. A large majority are women and 70% come from Africa and Asia, in particular Ethiopia, the Philippines, and Sri Lanka. They come to Lebanon under the kafala system, a migration sponsorship scheme that gives citizens and companies in the country almost total control over MDWs employment and migration status. Human rights organisations have long described the kafala system as a form of legalised slavery.

LAW is an independent, non-profit organisation of human rights lawyers and jurists working in fragile and conflict-affected areas. LAW provides legal aid to victims and communities that have suffered human rights violations and abuses in Africa, the Middle East, and South Asia.