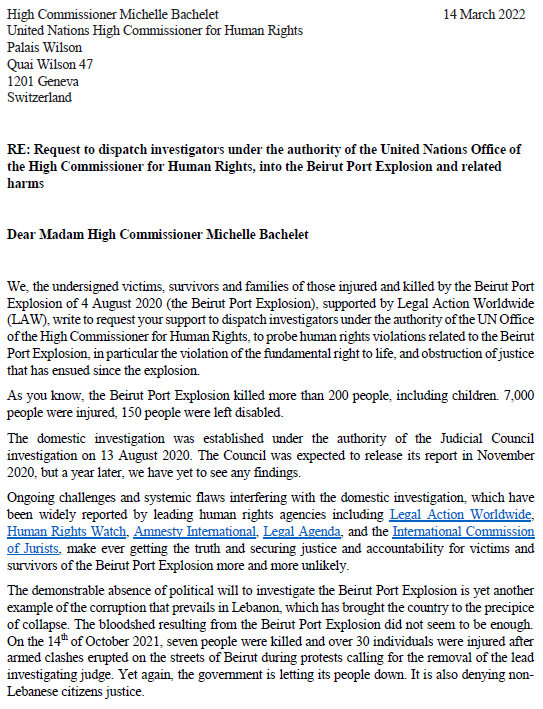 RE: Request to dispatch investigators under the authority of the United Nations Office of the High Commissioner for Human Rights, into the Beirut Port Explosion and related harms

We, the undersigned victims, survivors and families of those injured and killed by the Beirut Port Explosion of 4 August 2020 (the Beirut Port Explosion), supported by Legal Action Worldwide (LAW), write to request your support to dispatch investigators under the authority of the UN Office of the High Commissioner for Human Rights, to probe human rights violations related to the Beirut Port Explosion, in particular the violation of the fundamental right to life, and obstruction of justice that has ensued since the explosion.

As you know, the Beirut Port Explosion killed more than 200 people, including children. 7,000 people were injured, 150 people were left disabled.

The domestic investigation was established under the authority of the Judicial Council investigation on 13 August 2020. The Council was expected to release its report in November 2020, but a year later, we have yet to see any findings.

Ongoing challenges and systemic flaws interfering with the domestic investigation, which have been widely reported by leading human rights agencies including Legal Action Worldwide, Human Rights Watch, Amnesty International, Legal Agenda, and the International Commission of Jurists, make ever getting the truth and securing justice and accountability for victims and survivors of the Beirut Port Explosion more and more unlikely.

The demonstrable absence of political will to investigate the Beirut Port Explosion is yet another example of the corruption that prevails in Lebanon, which has brought the country to the precipice of collapse. The bloodshed resulting from the Beirut Port Explosion did not seem to be enough. On the 14th of October 2021, seven people were killed and over 30 individuals were injured after armed clashes erupted on the streets of Beirut during protests calling for the removal of the lead investigating judge. Yet again, the government is letting its people down. It is also denying non-Lebanese citizens justice.

We, and our loved ones that were killed and injured in the explosion, deserve that those responsible be identified and punished. Every single victim. Every survivor. Every member of the families affected deserves the truth. Only an independent and international investigation will identify those most responsible and will deliver the truth as a contributing step towards achieving accountability.

Our voices are not being heard by the government of Lebanon, and as our hopes of finding truth and justice for our loved ones fade in light of the dismal domestic inquiry, we urge you to please consider our request, and meet with us to hear about the losses we have suffered and discuss the role we hope you can play in securing truth and justice for the victims and survivors of the Beirut port explosion.
Yours sincerely, the undersigned,

~ 120 signatures from the victims and survivors of the Beirut Port Explosion, along with their families, including the families of the firefighters