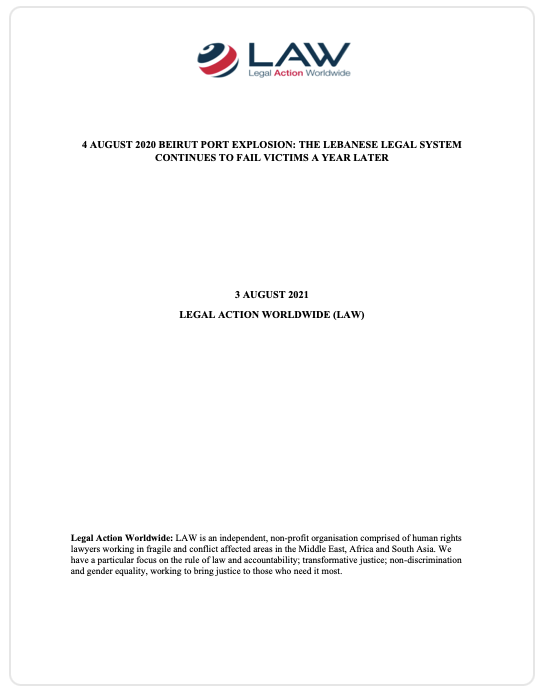 On 4 August 2020, an unconfirmed proportion of approximately 2,750 tonnes of ammonium nitrate  detonated at the port of Beirut, Lebanon, causing the most powerful explosion in Lebanon’s history  and one of the most powerful non-nuclear explosions in history. The explosion killed more than  200 people, who were nationals of Lebanon, Syria, Egypt, Bangladesh, Philippines, Australia, the  United States, Pakistan, the Netherlands, Germany and France. The explosion wounded more than  7,000 people, left 150 people disabled, damaged 77,000 apartments, displacing 300,000 people. A year later, the explosion has only compounded the ongoing economic crisis in Lebanon, leaving  thousands of children suffering from hunger.

Victims of the Beirut explosion have tirelessly called for justice, accountability and most  importantly, truth, about the circumstances of the explosion.In the absence of an international  independent fact-finding mission, the national investigation initiated by the Lebanese government  is currently the only vehicle for truth seeking and justice.

One hundred days after the explosion, on 13 November 2020, Legal Action Worldwide (LAW)  released a detailed report setting out the publicly available facts on the explosion, the progress of  the Lebanese investigations, and the significant restrictions on access to justice in Lebanon.

So far, 30 people have been arrested and detained in relation to the explosion, around 35 people have been charged, and the investigators have heard from over 50 witnesses. Around 700 criminal complaints were filed on behalf of victims and their families before the Judicial Council and the  General Prosecutor, however, key functionaries including former and current ministers continue  to evade the investigation by claiming immunity.

It is clear that the national investigation has faced multiple hurdles calling into question the independence and impartiality of the investigation into the cause of the explosion. As Lebanon  continues to grapple with an economic and political crisis, it is all the more important to shed light  on the justice system and the unwillingness of the ruling class to hold itself accountable. In the  past, the United Nations Human Rights Committee has flagged multiple issues impeding access to justice in Lebanon, including but not limited to political interference, lack of independence of  judiciary and fear of reprisal against victims and witnesses.

The ongoing domestic investigation led by the Judicial Council continues to face these issues at every stage. The failure of the domestic investigation in making any tangible progress has led to growing calls from victims of the explosion, Lebanese nationals, UN agencies, international organizations, religious leaders and human rights practitioners for an independent, impartial and  international fact-finding mission. Despite these calls, a year after the explosion, the victims of the Beirut port explosion are no closer to the truth about the explosion and justice than they were on 4 August 2020.

By 1 September 2020, 30 people had been arrested including the current and former customs chiefs Badri Daher and Shafik Merhi, former port director Hassan Koraytem, Abdel Hafiz Kaissi, director of land and maritime transport at the public works ministry, which nominally oversees the port, and Anthony Salloum, head of the military intelligence at the port. Other prominent persons arrested in connection with the explosion are Brigadier General Antoine Salloum, Major Daoud Fayyad, Major Joseph Al-Naddaf and Major Charbel Fawwaz. In addition, Interpol issued red notices for the arrest of the owner of the Rhosus, Russian national, Igor Grechushkin, the captain of the ship, and Russian national Borys Prokoshew, and a Portuguese national Jorge Moreira.

By mid-October, 30 people had been charged, and Judge Sawan had heard the testimonies of 47 witnesses. According to judicial sources, the charges included ‘willful negligence that led to the  deaths of hundreds of innocent civilians and injury of others’ and ‘causing massive destruction to  public and private property.’ By mid-November, Prosecutor Ghassan Khoury charged a total of  33 persons in relation to the explosion, including senior customs official Hani Hajj Shehadeh and  former customs chief Moussa Hazimeh. The investigating body has also recognized the Management and Investment Administration of the Beirut port as a legal person who can be held  responsible for criminal negligence.

The Judicial Council was expected to release an investigation report in mid-November 2020. However, on 7 November 2020, the Higher Judicial Council issued a statement announcing cooperation from the US, UK and French embassies in the investigation, and acknowledging the receipt of the US FBI report by the Lebanese judiciary. Until November 2020, the Judicial Investigator had pressed charges against low-level and mid-level officials only. Not a single minister, former or sitting had been questioned as a suspect, although Judge Sawan heard testimony from current and former ministers as “witnesses” in cases against port and other  administrative employees.

In April 2021, six people were released with the approval of the judge. In June 2021, Judge Tarek  al-Bitar (the current investigating judge) referred requests to release 19 individuals who were detained in relation to the explosion. Of these, the court released seven. The court refused to release senior port and customs employees.

IV. Role of ministers and immunity

High level government officials, including multiple ministers and President Michel Aoun were  aware of the presence of the ammonium nitrate and the risks posed by the substance. Al Jazeera reported,

On 25 November 2020, in his letter, Judge Sawan noted that ministers and officials of the departments of Finance, Public Works, and Justice may be implicated for negligence. Judge Sawan requested the Parliament to do what it deems appropriate in accordance with the Lebanese Constitution in relation to trying former and sitting ministers. Articles 70 and 71 of the Lebanese  Constitution stipulate the procedure for levelling charges and initiating legal action against former and sitting ministers of the Parliament.

In response to Judge Sawan’s request to question the former ministers, the Speaker of the Lebanese Parliament stated that such a step does not respect the principle of separation of powers stipulated by the Lebanese Constitution. Further, the Speaker noted that Judge Sawan violated Article 80 of  the Constitution, which stipulates that it is the task of the Supreme Council to try Presidents and  Ministers.

In December 2020, Judge Sawan summoned Lebanon’s caretaker Prime Minister Hassan Diab, former minister Ali Hassan Khalil, and former Public Works Ministers Ghazi Zaiter and Youssef Finianos for questioning the following week. None of the four former ministers appeared for  questioning, claiming immunity. Ministers Ali Hassan Khalil and Ghazi Zaiter accused Judge Sawan of violating the constitution on the grounds of immunity and moved to the Cassation Court to have him removed from the case. Notably, Judge Sawan’s decision to charge the ministers drew criticism from several political and religious leaders who expressed solidarity with the ministers and called Judge Sawan’s attempt to indict them a violation of the Lebanese Constitution. The Interior Minister Mohammed Fahmi publicly announced his decision not to carry out Judge Sawan’s orders. He said,

“I certainly will not ask the security services to implement  a judicial decision of this kind, and [Judge Sawan] can pursue me if [he] wants.”

Alternatively,  the Lebanese Parliament has attempted to create a special judicial body to try the former  ministers.

In February 2021, following the decision of the Cassation Court of Lebanon, Judge Sawan was  relieved of his role in the investigation acting on the complaint of the two former ministers. The court cited conflict of interest because Judge Sawan’s house was damaged in the explosion, and  Judge Bitar was named his successor. See Independence of the Investigating body section below.

The resistance put up by the Lebanese government under claims of Parliamentary immunity continues to stifle the investigation process. Following suit from his predecessor, Judge Sawan, once again, Judge Bitar called in Prime Minister Hassan Diab and the other ministers for  questioning. He also issued a request to question Nouhad Mashnouq (former Interior Minister) in relation to the case. He also asked the government and the Interior Minister for permission to question two of Lebanon’s most prominent security chiefs – the head of General Security  Directorate, Major-General Abbas Ibrahim, and the head of State Security, Major-General Tony  Saliba.

As Judge Bitar’s request lay before the sitting Interior Minister, Nouhad Mashnouk hosted a press conference on 23 July 2021 where he observed that he received a document about the Rhosus, the vessel carrying the ammonium nitrate, and its contents in 2014. He reportedly asked, “What the nitrates are for.” The answer he received was always “a substance used in agricultural fertilizers.”

In parallel, the Interior Minister, agreed to authorize questioning of the head of General Security Director, only to change his position and deny the request.

As of 29 July 2021, the Speaker of the Lebanese Parliament stated that Parliament is ‘ready’ to lift the immunity against former Prime Minister Hassan Diab and the former ministers who have been summoned by the investigating body. It is unclear how the readiness of the Speaker of the Lebanese Parliament to lift the immunity will manifest and who it will favor. Regardless, the continuing evasion of justice by Lebanese authorities obstruct effective investigation into the explosion, denying victims their right to truth and remedy.

The following table represents the names of high-level officials (former and sitting) who were  sought by Judge Sawan and Judge Bitar for questioning since November 2020.