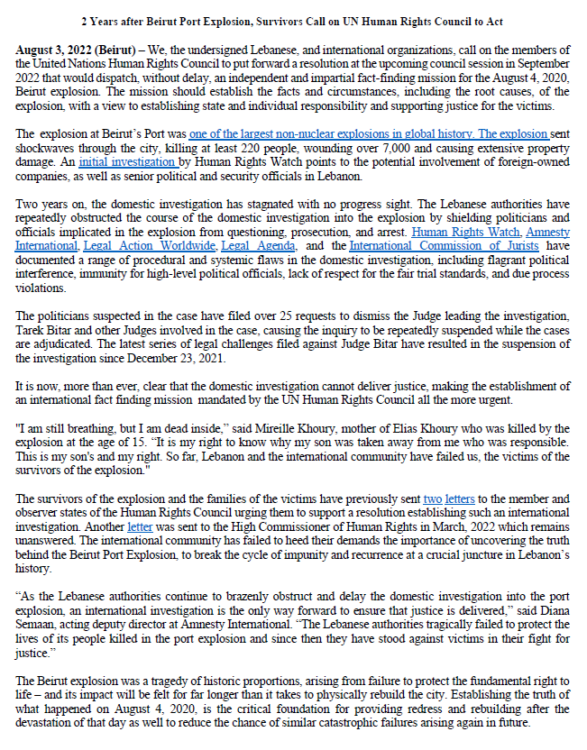 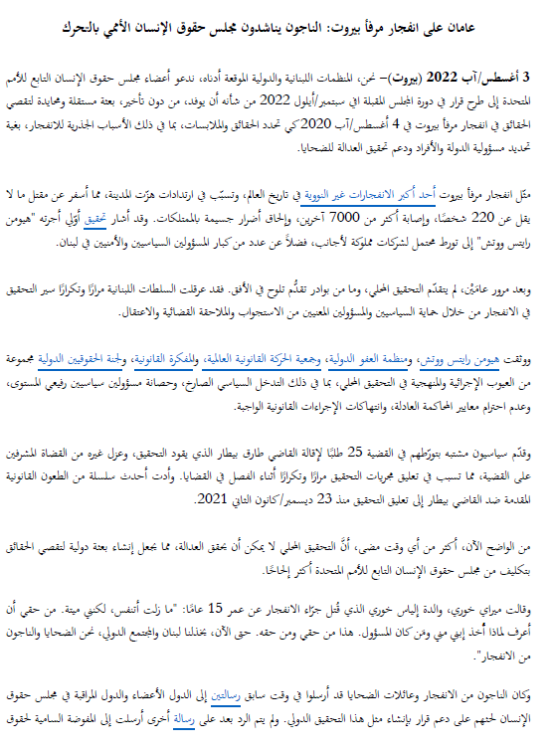 August 3, 2022 (Beirut) – We, the undersigned Lebanese, and international organizations, call on the members of the United Nations Human Rights Council to put forward a resolution at the upcoming council session in September 2022 that would dispatch, without delay, an independent and impartial fact-finding mission for the August 4, 2020, Beirut explosion. The mission should establish the facts and circumstances, including the root causes, of the explosion, with a view to establishing state and individual responsibility and supporting justice for the victims.

The explosion at Beirut’s Port was one of the largest non-nuclear explosions in global history. The explosion sent shockwaves through the city, killing at least 220 people, wounding over 7,000 and causing extensive property damage. An initial investigation by Human Rights Watch points to the potential involvement of foreign-owned companies, as well as senior political and security officials in Lebanon.

Two years on, the domestic investigation has stagnated with no progress sight. The Lebanese authorities have repeatedly obstructed the course of the domestic investigation into the explosion by shielding politicians and officials implicated in the explosion from questioning, prosecution, and arrest. Human Rights Watch, Amnesty International, Legal Action Worldwide, Legal Agenda, and the International Commission of Jurists have documented a range of procedural and systemic flaws in the domestic investigation, including flagrant political interference, immunity for high-level political officials, lack of respect for the fair trial standards, and due process violations.

The politicians suspected in the case have filed over 25 requests to dismiss the Judge leading the investigation, Tarek Bitar and other Judges involved in the case, causing the inquiry to be repeatedly suspended while the cases are adjudicated. The latest series of legal challenges filed against Judge Bitar have resulted in the suspension of the investigation since December 23, 2021.
It is now, more than ever, clear that the domestic investigation cannot deliver justice, making the establishment of an international fact finding mission mandated by the UN Human Rights Council all the more urgent.

“I am still breathing, but I am dead inside,” said Mireille Khoury, mother of Elias Khoury who was killed by the explosion at the age of 15. “It is my right to know why my son was taken away from me who was responsible. This is my son’s and my right. So far, Lebanon and the international community have failed us, the victims of the survivors of the explosion.”

The survivors of the explosion and the families of the victims have previously sent two letters to the member and observer states of the Human Rights Council urging them to support a resolution establishing such an international investigation. Another letter was sent to the High Commissioner of Human Rights in March, 2022 which remains unanswered. The international community has failed to heed their demands the importance of uncovering the truth behind the Beirut Port Explosion, to break the cycle of impunity and recurrence at a crucial juncture in Lebanon’s history.

“As the Lebanese authorities continue to brazenly obstruct and delay the domestic investigation into the port explosion, an international investigation is the only way forward to ensure that justice is delivered,” said Diana Semaan, acting deputy director at Amnesty International. “The Lebanese authorities tragically failed to protect the lives of its people killed in the port explosion and since then they have stood against victims in their fight for justice.”

The Beirut explosion was a tragedy of historic proportions, arising from failure to protect the fundamental right to life – and its impact will be felt for far longer than it takes to physically rebuild the city. Establishing the truth of what happened on August 4, 2020, is the critical foundation for providing redress and rebuilding after the devastation of that day as well to reduce the chance of similar catastrophic failures arising again in future.

The thousands of individuals whose lives have been upended and the millions who saw their capital city destroyed deserve nothing less.

“After two years of the failure of the domestic investigation, we call for an independent and impartial fact-finding mission to investigate the Beirut Port explosion.” said Antonia Mulvey, Executive Director of Legal Action Worldwide. “It is absolutely vital to achieve justice and uncover the truth, not only for victims, survivors, and their families but also for Lebanon. Lebanon cannot be built on shaky foundations.”