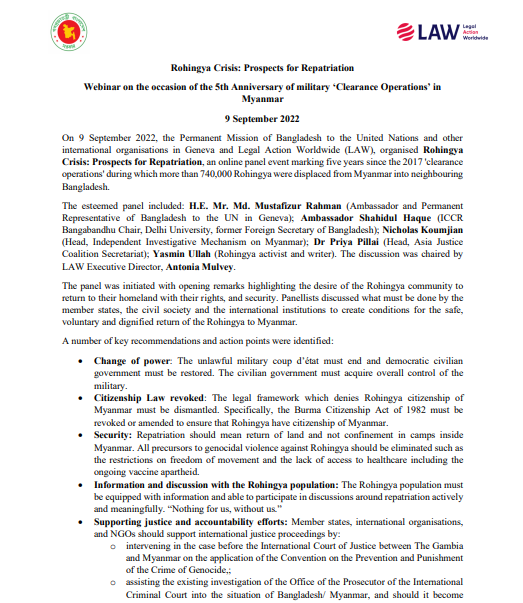 On 9 September 2022, the Permanent Mission of Bangladesh to the United Nations and other international organisations in Geneva and Legal Action Worldwide (LAW), organised Rohingya Crisis: Prospects for Repatriation, an online panel event marking five years since the 2017 ‘clearance operations’ during which more than 740,000 Rohingya were displaced from Myanmar into neighbouring Bangladesh.
The esteemed panel included: H.E. Mr. Md. Mustafizur Rahman (Ambassador and Permanent Representative of Bangladesh to the UN in Geneva); Ambassador Shahidul Haque (ICCR Bangabandhu Chair, Delhi University, former Foreign Secretary of Bangladesh); Nicholas Koumjian (Head, Independent Investigative Mechanism on Myanmar); Dr Priya Pillai (Head, Asia Justice Coalition Secretariat); Yasmin Ullah (Rohingya activist and writer). The discussion was chaired by LAW Executive Director, Antonia Mulvey.
The panel was initiated with opening remarks highlighting the desire of the Rohingya community to return to their homeland with their rights, and security. Panellists discussed what must be done by the member states, the civil society and the international institutions to create conditions for the safe, voluntary and dignified return of the Rohingya to Myanmar.

A number of key recommendations and action points were identified

–intervening in the case before the International Court of Justice between The Gambiaand Myanmar on the application of the Convention on the Prevention and Punishmentof the Crime of Genocide;

–supporting, strategically and with caution, universal or extraterritorial jurisdiction initiatives in domestic courts.

–increasing targeted sanctions against those involved in (i) perpetrating international crimes or serious            human rights violations; or (ii) providing material support to perpetrators.

–ensuring an end to support for companies owned by members of Myanmar’s military or companies                 supporting the military. I.e. the financial flows which support the Tatmadaw should be stopped. Within this context, the United Nations has a clear role to play in providing information and monitoring the situation of human rights in Myanmar. Civil society too plays a critical role, and should collaborate in supporting justice and accountability efforts and advocating for the rights of the peoples of Myanmar