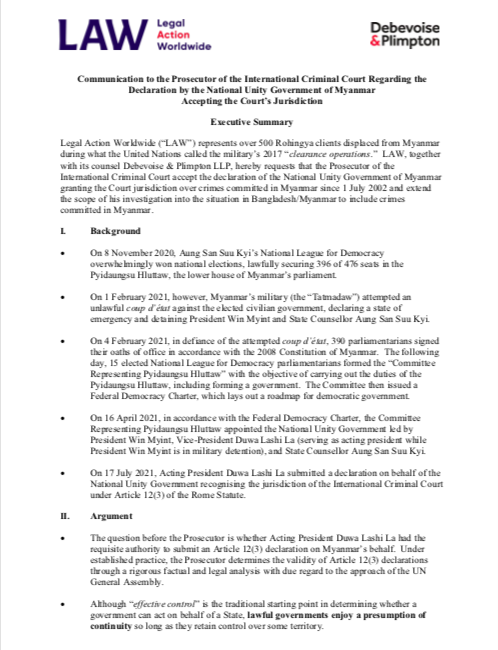 COX’S BAZAR, BANGLADESH: International human rights NGO Legal Action Worldwide (LAW) has partnered with Debevoise & Plimpton LLP to make a communication to the International Criminal Court (ICC) today.  That communication urges the Prosecutor of the ICC to accept the National Unity Government (NUG)’s recent declaration granting the ICC jurisdiction over genocide and other international crimes committed in Myanmar since July 2002.

LAW represents over 500 Rohingya clients, who are victims of the 2017 so-called “clearance operations,” in which thousands of Rohingya were killed, tortured and subjected to brutal sexual violence by Myanmar’s military (the “Tatmadaw”). More than 670,000 Rohingya were forced to flee to neighbouring Bangladesh, where they remain to date.

In February 2021, the Tatmadaw attempted to seize power from Myanmar’s elected civilian government. Members of parliament who won the November 2020 election, as well as leaders of the deposed civilian government, formed the NUG in April 2021. On 17 July 2021, the NUG filed a declaration under Article 12(3) of the Rome Statute, accepting the ICC’s jurisdiction to investigate and prosecute crimes committed in Myanmar.

The ICC’s current investigation is limited to “continuing crimes,” such as the crime against humanity of forced deportation of the Rohingya, which began in Myanmar but continues in Bangladesh (a State Party of the Rome Statute).  An acceptance of the NUG’s declaration would allow the ICC to investigate crimes against Rohingya and other ethnic groups within Myanmar, including crimes committed in February 2021, as well as to extend the current investigation to consider the crime of genocide.

Antonia Mulvey, LAW’s Executive Director said: “The Prosecutor of the ICC has a unique opportunity to exercise his discretion to accept the NUG’s declaration as the only legitimate representatives of the state of Myanmar and thereby fulfil the mandate of the ICC to investigate and prosecute the most serious crimes – this should be of concern for all of us.”

She continued: “The Rohingya clients that we represent are extremely hopeful that the ICC will accept the NUG’s declaration granting jurisdiction of the Court over crimes committed in the country since 2002. This represents an important step towards justice for the community, who have suffered greatly and continue to suffer.”

One of LAW’s Rohingya clients, Hasina (pseudonym), stated: “I’m very glad to hear that the NUG accepts the ICC’s jurisdiction. It is so important that all victims and survivors of horrendous crimes committed by the Myanmar military have an opportunity to obtain justice.”

Catherine Amirfar, the Debevoise partner leading the firm’s efforts, said: “Together with LAW, we are honoured to help give voice to the Rohingya victims and seek to hold accountable the perpetrators of these horrific crimes in Myanmar. The Prosecutor is presented with an opportunity to bring them to justice.”

The communication requests that:

You can read more about LAW’s work on the Rohingya crisis here.