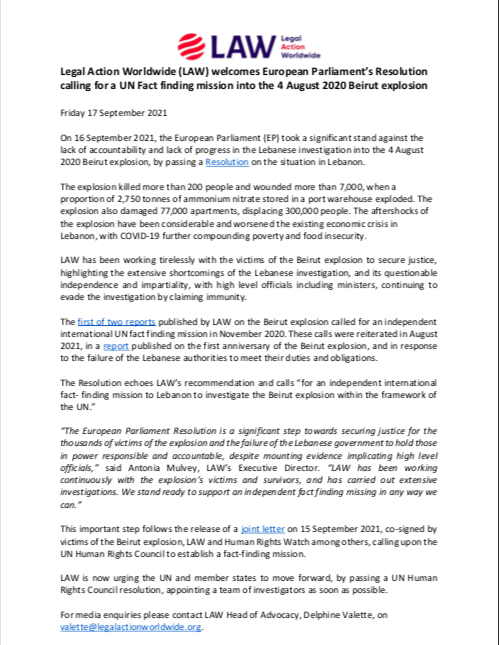 On 16 September 2021, the European Parliament (EP) took a significant stand against the lack of accountability and lack of progress in the Lebanese investigation into the 4 August 2020 Beirut explosion, by passing a Resolution on the situation in Lebanon.

The explosion killed more than 200 people and wounded more than 7,000, when a proportion of 2,750 tonnes of ammonium nitrate stored in a port warehouse exploded. The explosion also damaged 77,000 apartments, displacing 300,000 people. The aftershocks of the explosion have been considerable and worsened the existing economic crisis in Lebanon, with COVID-19 further compounding poverty and food insecurity.

LAW has been working tirelessly with the victims of the Beirut explosion to secure justice, highlighting the extensive shortcomings of the Lebanese investigation, and its questionable independence and impartiality, with high level officials including ministers, continuing to evade the investigation by claiming immunity.

The first of two reports published by LAW on the Beirut explosion called for an independent international UN fact finding mission in November 2020. These calls were reiterated in August 2021, in a report published on the first anniversary of the Beirut explosion, and in response to the failure of the Lebanese authorities to meet their duties and obligations.

The Resolution echoes LAW’s recommendation and calls “for an independent international fact- finding mission to Lebanon to investigate the Beirut explosion within the framework of the UN.”

“The European Parliament Resolution is a significant step towards securing justice for the thousands of victims of the explosion and the failure of the Lebanese government to hold those in power responsible and accountable, despite mounting evidence implicating high level officials,” said Antonia Mulvey, LAW’s Executive Director. “LAW has been working continuously with the explosion’s victims and survivors, and has carried out extensive investigations. We stand ready to support an independent fact finding missing in any way we can.”

This important step follows the release of a joint letter on 15 September 2021, co-signed by victims of the Beirut explosion, LAW and Human Rights Watch among others, calling upon the UN Human Rights Council to establish a fact-finding mission.

LAW is now urging the UN and member states to move forward, by passing a UN Human Rights Council resolution, appointing a team of investigators as soon as possible.