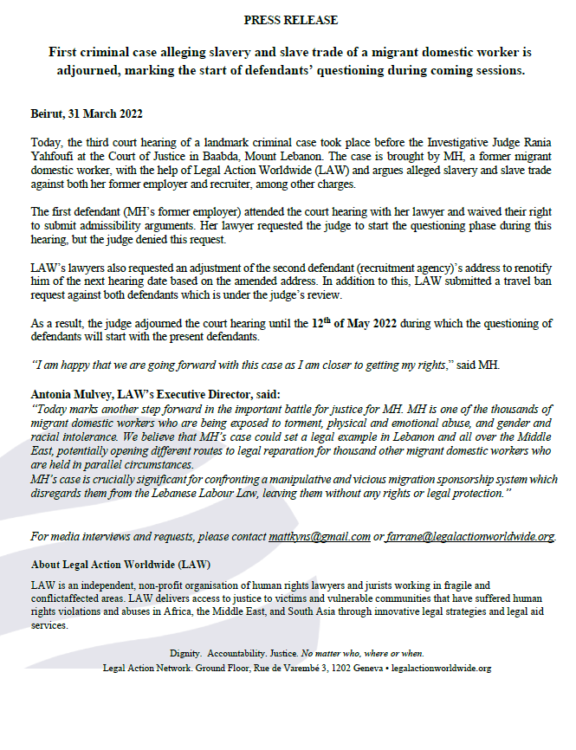 Today, the third court hearing of a landmark criminal case took place before the Investigative Judge Rania Yahfoufi at the Court of Justice in Baabda, Mount Lebanon. The case is brought by MH, a former migrant domestic worker, with the help of Legal Action Worldwide (LAW), and argues alleged slavery and slave trade against both her former employer and recruiter, among other charges.

The first defendant (MH’s former employer) attended the court hearing with her lawyer and waived their right to submit admissibility arguments. Her lawyer requested the judge to start the questioning phase during this hearing, but the judge denied this request.

LAW’s lawyers also requested an adjustment of the second defendant (recruitment agency)’s address to re-notify him of the next hearing date based on the amended address. In addition to this, LAW submitted a travel ban request against both defendants which is under the judge’s review.

As a result, the judge adjourned the court hearing until the 12th of May 2022 during which the questioning of defendants will start with the present defendants.

“I am happy that we are going forward with this case as I am closer to getting my rights” said MH.

“Today marks another step forward in the important battle for justice for MH. MH is one of the thousands of migrant domestic workers who are being exposed to torment, physical and emotional abuse, and gender and racial intolerance. We believe that MH’s case could set a legal example in Lebanon and all over the Middle East, potentially opening different routes to legal reparation for thousand other migrant domestic workers who are held in parallel circumstances.

MH’s case is crucially significant for confronting a manipulative and vicious migration sponsorship system which disregards them from the Lebanese Labour Law, leaving them without any rights or legal protection.”

For media interviews and requests, please contact mattkyns@gmail.com or farrane@legalactionworldwide.org.

LAW is an independent, non-profit organisation of human rights lawyers and jurists working in fragile and conflict-affected areas. LAW delivers access to justice to victims and vulnerable communities that have suffered human rights violations and abuses in Africa, the Middle East, and South Asia through innovative legal strategies and legal aid services.