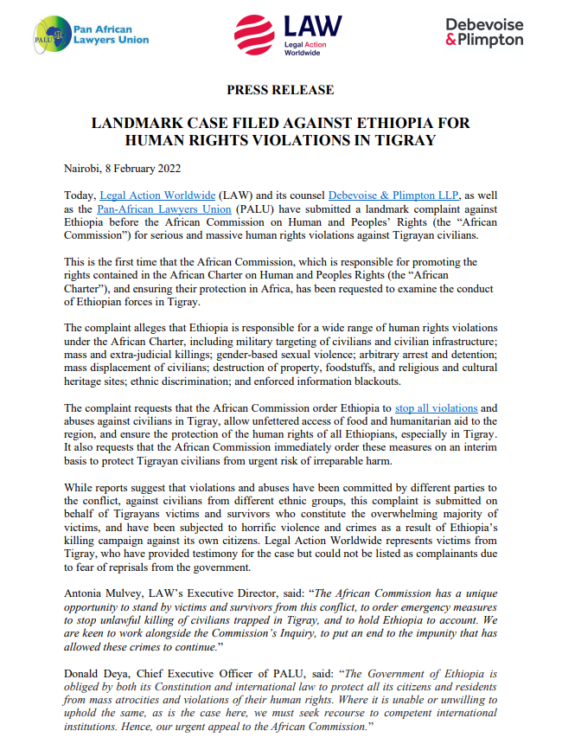 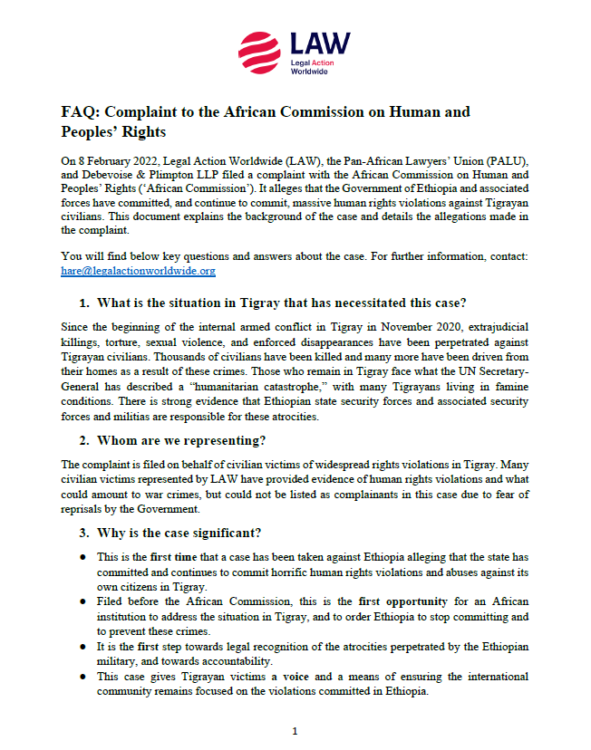 Today, Legal Action Worldwide (LAW) and its counsel Debevoise & Plimpton LLP, as well as the Pan-African Lawyers Union (PALU) have submitted a landmark complaint against Ethiopia before the African Commission on Human and Peoples’ Rights (the “African Commission”) for serious and massive human rights violations against Tigrayan civilians.

This is the first time that the African Commission, which is responsible for promoting the rights contained in the African Charter on Human and Peoples Rights (the “African Charter”), and ensuring their protection in Africa, has been requested to examine the conduct of Ethiopian forces in Tigray.

The complaint alleges that Ethiopia is responsible for a wide range of human rights violations under the African Charter, including military targeting of civilians and civilian infrastructure; mass and extra-judicial killings; gender-based sexual violence; arbitrary arrest and detention; mass displacement of civilians; destruction of property, foodstuffs, and religious and cultural heritage sites; ethnic discrimination; and enforced information blackouts.

The complaint requests that the African Commission order Ethiopia to stop all violations and abuses against civilians in Tigray, allow unfettered access of food and humanitarian aid to the region, and ensure the protection of the human rights of all Ethiopians, especially in Tigray. It also requests that the African Commission immediately order these measures on an interim basis to protect Tigrayan civilians from urgent risk of irreparable harm.

While reports suggest that violations and abuses have been committed by different parties to the conflict, against civilians from different ethnic groups, this complaint is submitted on behalf of Tigrayans victims and survivors who constitute the overwhelming majority of victims, and have been subjected to horrific violence and crimes as a result of Ethiopia’s killing campaign against its own citizens. Legal Action Worldwide represents victims from Tigray, who have provided testimony for the case but could not be listed as complainants due to fear of reprisals from the government.

Antonia Mulvey, LAW’s Executive Director, said: “The African Commission has a unique opportunity to stand by victims and survivors from this conflict, to order emergency measures to stop unlawful killing of civilians trapped in Tigray, and to hold Ethiopia to account. We are keen to work alongside the Commission’s Inquiry, to put an end to the impunity that has allowed these crimes to continue.”

Donald Deya, Chief Executive Officer of PALU, said: “The Government of Ethiopia is obliged by both its Constitution and international law to protect all its citizens and residents from mass atrocities and violations of their human rights. Where it is unable or unwilling to uphold the same, as is the case here, we must seek recourse to competent international institutions. Hence, our urgent appeal to the African Commission.”

Catherine Amirfar, Co-Chair of Debevoise’s International Dispute Resolution and Public International Law Groups, said: “We are honored to amplify the voices of Tigrayan victims and to seek accountability for those who perpetrated horrific crimes against them. We call on the African Commission to urge the government to end and remedy the abuses for which it is responsible.”