LAW Executive Director, Antonia Mulvey, has participated in a number of side-events to the 39th session of the Human Rights Council in Geneva. 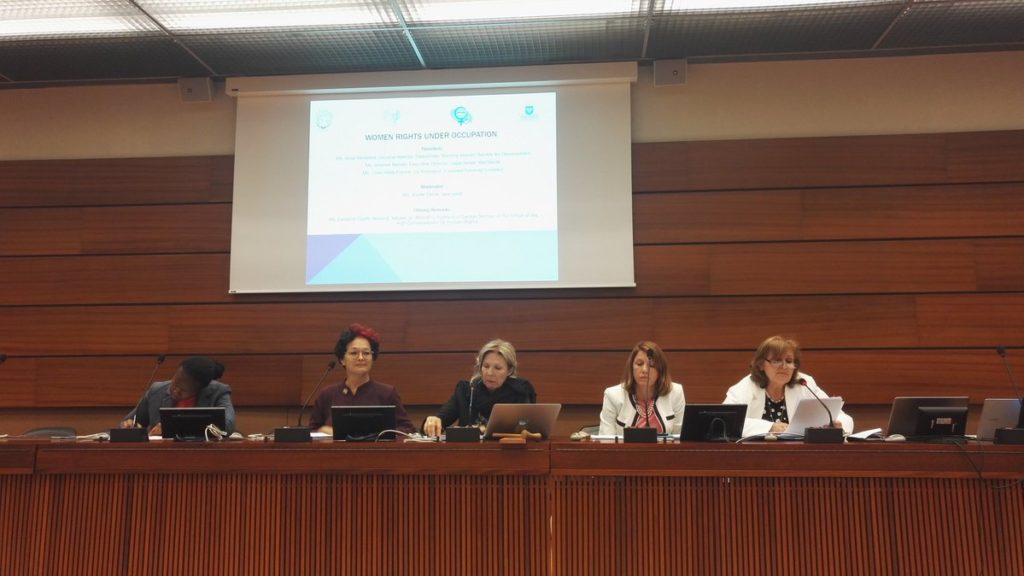 Antonia (second from right) speaks at the ‘Women under Occupation’ panel

On 17 September, Antonia participated in ‘Cycle of Gender-Based Violence,’ a panel discussion organised by Euromed Feminist Initiative, in partnership with LAW, the Coalition of Syrian Women for Democracy and the Women’s UN Report Network, discussing ongoing sexual and gender-based violence in Syria and around the world. Antonia highlighted the need for improved information gathering, especially by first responders, increased use of technology and the importance of shifting stigma from the survivors to the perpetrators of sexual violence.

On 24 September Antonia was a key speaker on ‘Women’s Rights Under Occupation.’ Here, Antonia emphasised the disproportionate impact of the ongoing occupation of Palestine upon women. Antonia and the panellists discussed potential avenues for redress open to Palestinian women, and the opportunities and challenges involved.

In her capacity as gender advisor and sexual and gender-based violence investigator to the UN Fact Finding Mission on Myanmar, Antonia participated in the OHCHR (Office of the High Commissioner for Human Rights) launch of guidance on ‘Integrating Gender into Human Rights Investigations.’ During this event, on 25 September, Antonia underscored that, “trained SGBV investigators were crucial to uncovering the horrific scale of sexual violence occurring in Myanmar.”