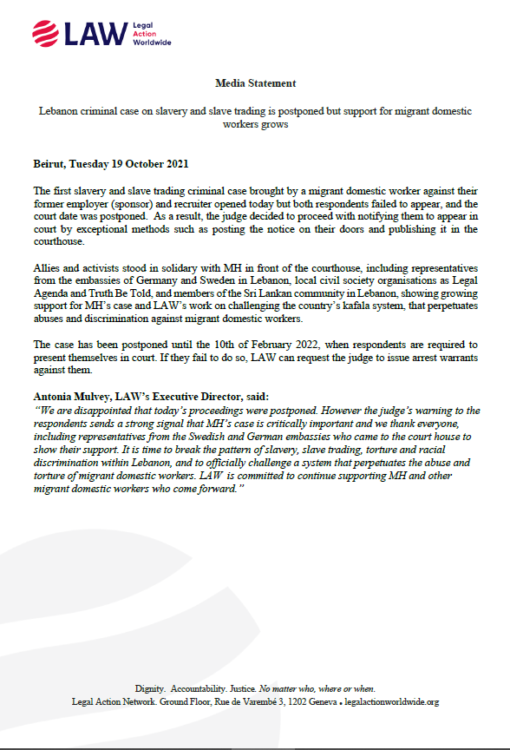 The first slavery and slave trading criminal case brought by a migrant domestic worker against their former employer (sponsor) and recruiter opened today but both respondents failed to appear, and the court date was postponed. As a result, the judge decided to proceed with notifying them to appear in court by exceptional methods such as posting the notice on their doors and publishing it in the courthouse.

Allies and activists stood in solidary with MH in front of the courthouse, including representatives from the embassies of Germany and Sweden in Lebanon, local civil society organisations as Legal Agenda and Truth Be Told, and members of the Sri Lankan community in Lebanon, showing growing support for MH’s case and LAW’s work on challenging the country’s kafala system, that perpetuates abuses and discrimination against migrant domestic workers.

The case has been postponed until the 2nd of February 2022, when respondents are required to present themselves in court. If they fail to do so, LAW can request the judge to issue arrest warrants against them.

LAW’s Executive Director, Antonia Mulvey said: “We are disappointed that today’s proceedings were postponed. However, the judge’s warning to the respondents sends a strong signal that MH’s case is critically important and we thank everyone, including representatives from the Swedish and German embassies who came to the court house to show their support. It is time to break the pattern of slavery, slave trading, torture and racial discrimination within Lebanon, and to officially challenge a system that perpetuates the abuse and torture of migrant domestic workers. LAW is committed to continue supporting MH and other migrant domestic workers who come forward.”