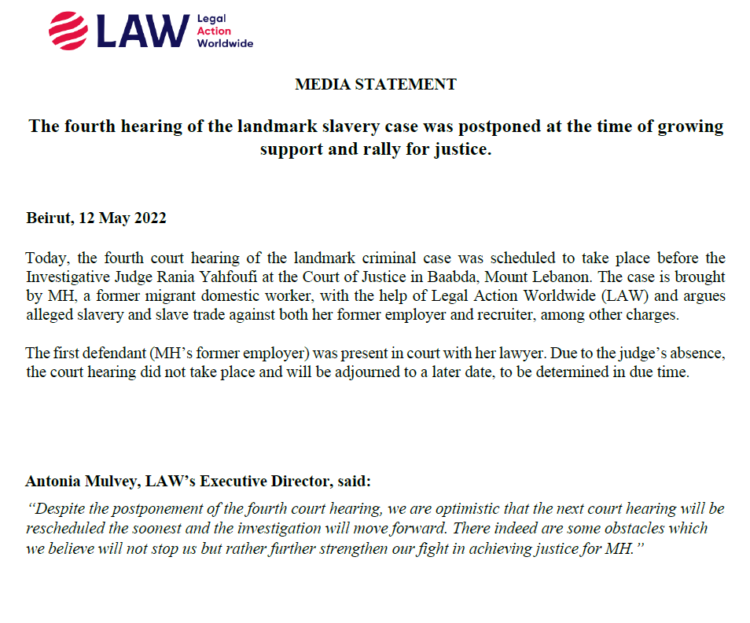 Today, the fourth court hearing of the landmark criminal case was scheduled to take place before the Investigative Judge Rania Yahfoufi at the Court of Justice in Baabda, Mount Lebanon. The case is brought by MH, a former migrant domestic worker, with the help of Legal Action Worldwide (LAW) and argues alleged slavery and slave trade against both her former employer and recruiter, among other charges.

The first defendant (MH’s former employer) was present in court with her lawyer. Due to the judge’s absence, the court hearing did not take place and will be adjourned to a later date, to be determined in due time.

Antonia Mulvey, LAW’s Executive Director, said:
“Despite the postponement of the fourth court hearing, we are optimistic that the next court hearing will be rescheduled the soonest and the investigation will move forward. There indeed are some obstacles which we believe will not stop us but rather further strengthen our fight in achieving justice for MH.”

For media interviews and requests, please contact mattkyns@gmail.com or farrane@legalactionworldwide.org

LAW is an independent, non-profit organisation of human rights lawyers and jurists working in fragile and conflict affected areas. LAW delivers access to justice to victims and vulnerable communities that have suffered human rights violations and abuses in Africa, the Middle East, and South Asia through innovative legal strategies and legal aid services.