Sexual Exploitation and Abuse as an International Crime

LAW advocates for sexual exploitation and abuse perpetrated by security forces against protected persons be recognised as rape and in certain circumstances as international crime – namely a war crime and/or crime against humanity.

At the crux of LAW’s argument, is that survivors of sexual exploitation and abuse have not provided genuine consent to sex. In many circumstances, the perpetrators have taken advantageof a coercive environment or an abuse of power. In some instances, the survivor is a minor, unable to give genuine consent due to their age. Without consent, sex becomes rape. Rape is conduct that may amount to an international crime – namely a war crime and/or crime against humanity under the Rome Statute.

Background on Sexual Exploitation and Abuse

Sexual exploitation and abuse covers a range of behaviours: Security forces may engage in ‘transactional sex’ or ‘survival sex,’ officers may engage in relationships, sometimes labelled ‘affairs,’ with minors– acts that, in many circumstances, should be more accurately described as rape due to the survivors’ age, the coercive environment or abuse of power by the perpetrator.

Underpaid, poorly equipped and badly trained security forces are more likely to commit such abuses. Further, these abuses are more likely to take place in conflict zones; where there is limited or no accountability. Fear of retaliation, stigma and lack of confidence in the justice system deter survivors from reporting these crimes – making accurate statistics about sexual exploitation and abuse by security forces difficult to obtain. Governments, international organisations and donors have obligations to ensure their actions, and those of their security forces are consistent with international law and do not contribute towards human rights violations. 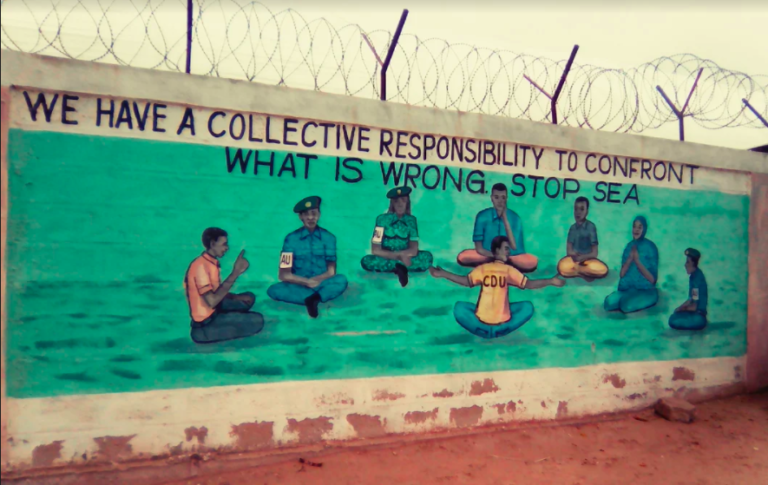 From conflict-affected countries and fragile states around the world, allegations of sexual exploitation and abuse have been made against security forces, including peacekeeping forces. A 2017 Agence-Presse Investigation reported an estimated 2000 allegations of sexual abuse against UN peacekeepers and personnel between 2004 and 2016. These include allegations with survivors as young as eight or nine years old. Reports from UN and civil society sources underscore that such figures are likely to underrepresent the scale of the issue due to lack of reporting.

Little action, if any, is taken to address these allegations. Criminal prosecutions, either in the country where sexual exploitation and abuse takes place, or the home country of the perpetrator, remain disconcertingly low. This figure is even lower when considering non-uniformed personnel.