Legal Action is fully funded and supported by LAW; using creative legal strategies to increase access to justice for women and girls, and those who have been subjected to sexual and gender-based violence. These strategies are implemented through a combination of legal aid and empowerment, strategic litigation and targeted legal advocacy. In 2019 Legal Action opened an office in Beirut and is now providing legal assistance and representation from Beirut and four field offices in Alay, Burj Hammoud, Tripoli and Akkar.

Legal Action’s legal aid lawyers work closely with international lawyers in LAW’s network to develop innovative legal strategies designed to increase access to justice for survivors of sexual violence, people who are stateless, and others who have suffered egregious human rights violations and abuses.

On 4 August 2020 a massive explosion ripped through Beirut, Lebanon. The root causes of the blast and who is ultimately responsible remain unclear, however the devastation speaks for itself. The blast killed over 200 people, left 300,000 homeless and 7,000 more injured . It destroyed thousands of buildings and incinerated the city’s grain store.

LAW and Legal Action Lebanon are providing support to survivors’ group Victims of the Beirut August Massacre. The group of  over 1000 victims and families of victims have called upon the international community to support their pursuit of justice, requesting an independent and impartial investigation and prosecution to hold accountable those responsible and order damages to the victims.

Report on behalf of victims of the beirut explosion

On 13 November, LAW released the first comprehensive report gathering all available facts relating to the 4 August Beirut explosion and the domestic investigation thus far. The report has been submitted to key individuals at the UN, and to representatives of key member states.

Along with key facts, the report sets out the five key requests of the victims group Victims of the Beirut August Massacre,  as follows:

And in Arabic here

You can find out more about the group on their website here, where you can sign the petition and join their call join their call for an independent and impartial investigation and trial that will reveal the truth and do justice to the victims.

In addition, Legal Action Lebanon, based in Gemayze, Beirut, establishing an emergency project in response to the dire needs of the community. From tents set up outside the office, the team provide legal information and assistance to people who have suffered and continue to suffer from the blast.

Gender inequality in Lebanon is particularly stark. According to 2017 the Gender Gap Index, Lebanon ranks fifth to last in the Middle East and North Africa region (ranked at 137), behind only Saudi Arabia, Iran, Syria and Yemen. Since 2010, Lebanon has seen a consistent decline in its global index rank. LAW’s work on Lebanon is focused on legal aid and empowerment of women, including Lebanese women, women from the Syrian and Palestinian refugee communities, and female domestic workers.

Percentage of households (2017) who correctly followed all four steps of the process and successfully registered their child.

Dealing With The Past Live Photo Exhibition and Documentary 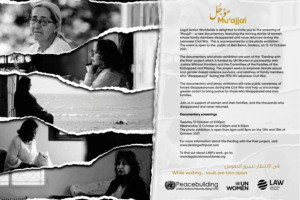 The “Dealing with the Past” project, funded by UN
Women, focuses on women victims and survivors of the
Lebanese civil war to the present. The project provides
legal aid, psychosocial support and avenues for
storytelling to enable survivors and relatives of the
disappeared to describe their experiences and address
their legal and psychosocial needs.
Within this project, legal information sessions were
organised for women victims and survivors of the
Lebanese civil war, legal assistance and counselling
were provided, and some women were represented
before the courts. In addition, the project focused on
legal research; Legal Action issued a report on gender
crimes committed during the civil war and an
assessment of the legal, psychological and medical
needs of women from the families of the disappeared.
In addition, Legal Action encouraged women to share
their stories through artistic means (photography and a
video documentary), and a number of women were
referred to receive psychosocial support. This project is
in partnership with the Committee of the Families of the
Kidnapped and Disappeared in Lebanon and Justice
without Frontiers.

The Lebanon team had the first court hearing for the criminal case of M.H, 38-year-old, former migrant domestic worker in Lebanon who was exposed to slavery, slave trading, forced labor, mental and physical abuse as well as racial, and gender discrimination.

The hearing took place but was adjourned since the defendants did not show up and another hearing was set to take place in February 2022.

Click the link above for the full media statement.