“The most comprehensive Bill on sexual crimes, seen anywhere.”

Sexual violence remains pervasive across much of Somalia. Two decades of conflict and the collapse of the basic functions of government have brought about a system where women and girls, many displaced and living in IDP camps, are inherently vulnerable to rape and other forms of sexual violence. In recent years, the vulnerability of women and girls has been exacerbated by food crisis in the region.

Between 2013 and 2015, LAW worked closely with the Ministry of Women and Human Rights Development of the Federal Government of Somalia to spearhead the drafting of the first Somali Sexual Offences Bill. LAW also assisted the Somaliland Minister for Labour and Social Affairs and the Puntland Minister for Women Affairs and Family Development in preparing their equivalent bills. LAW is currently in discussions with the Minister for Gender, Family Affairs and Human Rights about drafting the Sexual Offences Bill in Jubbaland.

An International Technical Review Unit (ITRU) was established to provide guidance in drafting, comprised of expert judges, prosecutors, investigators, police officers and drafters, was established to advise on the draft Bills and their implementation. President Judge Vagn Joensen of the International Criminal Tribunal for Rwanda, who was the expert judge on the ITRU, described the draft legislation as “the most comprehensive Bill on sexual crimes [he had] seen anywhere.”

You can read a condensed version of the bill here.

What is included in the Somali Sexual Offences Bill?

The Sexual Offences Bill is a milestone in Somalia. Once enacted, it will criminalise a wide range of sexual offences. The Bill sets out clear duties for police, investigators and prosecutors and imposes penalties on those who fail to adequately investigate or prosecute sexual crimes, or who interfere with investigations and prosecutions.

The Bill also provides specific protections for vulnerable groups such as children, persons with disabilities, internally displaced people, and others outside the social protection mechanisms that exist within Somali society. It is survivor-centred and prioritises the rights and needs of the survivor during court proceedings, as well as out of court structures to protect their identity and welfare. The Bill envisages the establishment of specialised Sexual Violence Units comprised of specialised police, investigators, prosecutors and judges to investigate, prosecute and hear all sexual offence cases.

Children and people with a disability have their own sections and special sets of rights under the Act. This includes the right to specialised care and attention

The Bill also specifies that any assistance given to children must be done by qualified professionals.

Key provisions of the Bills on duties of police and prosecutors

The Bill lays out the duty of police, police investigation and prosecutors from the point at which someone reports a GBV case until the point that it is heard in court. The process set out in the Bill establishes clear referral pathways between each part of the justice sector. Non-compliance amounting to obstruction of justice is criminalised.

How has the Bill progressed in the different regions of Somalia?

After two years of consultations, the Ministry of Women and Human Rights Development submitted a final draft to the Cabinet on 31 December 2015. The Bill remained with the Cabinet without being debated for over two years. The current Ministry of Women and Human Rights Development, Honourable Minister Deqa Yasin, presented the Bill to the Cabinet at the beginning of 2018 and has continuously advocated for Cabinet to adopt it and to pass it to Parliament for debate.

On 30 May 2018, these efforts proved successful. The Bill was adopted by the Federal Council of Ministers (the Cabinet), and will soon be passed to the Parliament. The Bill must be debated in the Lower and Upper Houses of Parliament. If approved by both, it will pass to the President to be signed into law.

The Bill passed through the Puntland Parliament and was signed into law in February 2016. LAW provided technical advice to the Ministry of Justice in the drafting of the Bill.

The next challenge will be implementation. LAW is in the process of developing a Memorandum of Understanding (MOU) to sign with the Puntland Ministry of Justice and identifying the areas where LAW could assist the Ministry in ensuring the protections provided in the Bill translate to meaningful change on the ground.

In April 2018, Somaliland’s House of Elders approved the Bill, having been passed by Somaliland’s lower house in January 2018. The Bill now awaits assent.

LAW had assisted the Somaliland Minister for Labour and Social Affairs in drafting the Bill. It is LAW’s understanding that a number of changes were made to the draft Bill  by the House of Elders.

Once the Bill has been passed, it mandates in each region that a national policy framework be developed to assist and oversee the implementation of the Bill. LAW is assisting the relevant Ministries on the development of this policy framework.

What work does LAW do around the Bill?

Assistance in developing the Bills

Advocacy on the Bills

LAW has carried out wide-ranging advocacy around the bills. Examples include LAW’s 2016 high-level panel in Mogadishu, attended by  over 70 members of Somali and international civil society, the Somali government, the donor community and the UN.

The panel discussion focused on sexual violence in Somalia and included the following panelists:

All panelists agreed that the Sexual Offences Bill was crucial, and must be passed as a matter of urgency.

LAW produced a series of advocacy materials around the Bill, designed for campaigners to use in raising awareness about the Bill.

On 10 – 11 April, LAW facilitated a civil society workshop on the Bill. Participants from over 40 national non-governmental organisations (NGO) participated to coordinate their advocacy efforts to pass the Bill. During this workshop, these organisations identified some gaps and weaknesses in the current Bill. These gaps or inconsistencies emerged over and due to the Bill’s two year consultation process, in which the priorities of a broad range of stakeholders were taken into account and are now reflected in the draft legislation. Workshop participants agreed on some amendments to be made to make the Bill even stronger and more relevant to the Somali context. The suggested amendments are highly innovative and would make the Bill uniquely reflective of the Somali context, while remaining one of the strongest pieces of sexual violence in the world. The summary of this workshop and the suggested amendments can be found here. 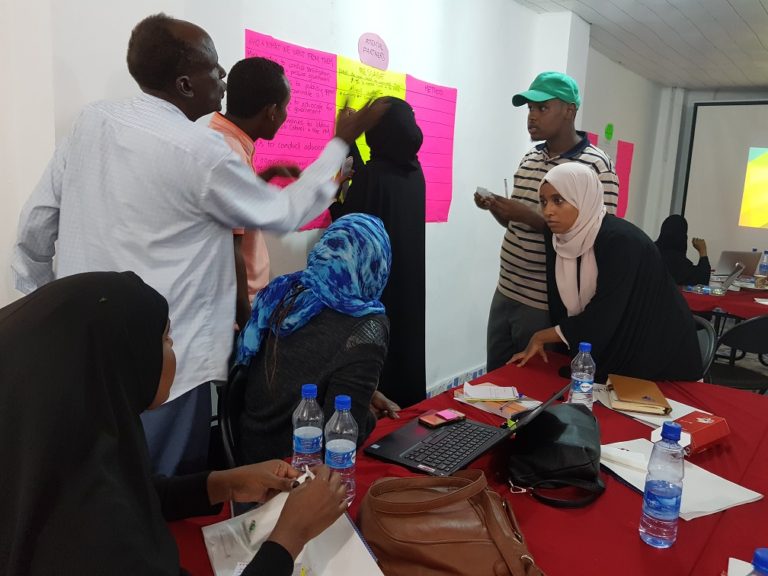 How was the Bill drafted?

• In each region, the Bills were drafted by Somali legislative drafters. For the Federal Government of Somalia (FGS), and Somaliland Bills, the legislative drafters were LAW staff and for the Puntland Bill, the drafter was a Ministry of Justice lawyer.

• For the FGS and Somaliland Bills, our legislative drafters worked in tandem with a drafting unit of three Somali and three international experts to determine what should be included in the law.

• LAW produced a study on best practices for a Sexual Offences Bill through researching comparative jurisdictions. This was used to assist the drafters in framing the more controversial parts of the Bill and to improve provisions on practical implementation.

• In FGS, Somaliland, and Puntland, LAW facilitated or was involved in public consultations and validation workshops that brought together lawyers, civil society, elders and religious leaders to discuss the contents of the Bill.

• LAW drafted implementation plans for the FGS and Somaliland Bills.

• An International Technical Review Unit (ITRU) was established to provide pro bono legal advice on the draft Bills and their implementation plans to ensure they are relevant to the Somali context and in line with international best practice. Members of the ITRU included international expert judges, prosecutors, investigators, police officers and legislative drafters. President Judge Vagn Joensen of the International Criminal Tribunal for Rwanda, who was the expert judge on the ITRU, described the draft legislation as “the most comprehensive Bill on sexual crimes [he had] seen anywhere.”