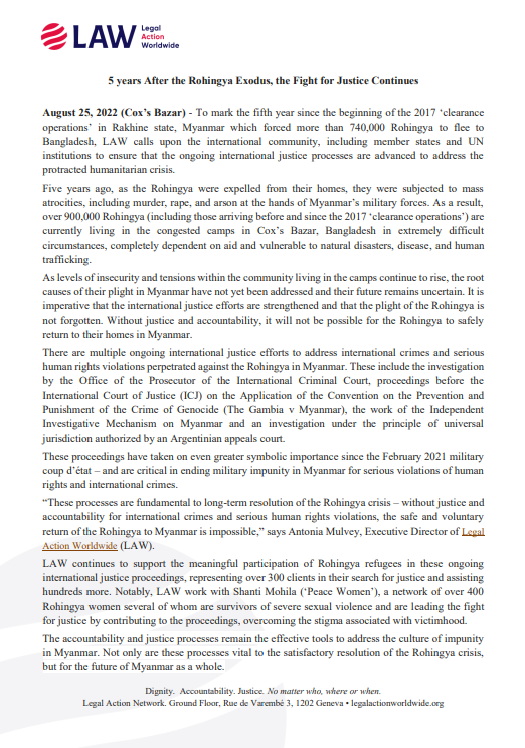 August 25, 2022 (Cox’s Bazar) – To mark the fifth year since the beginning of the 2017 ‘clearance operations’ in Rakhine state, Myanmar which forced more than 740,000 Rohingya to flee to Bangladesh, LAW calls upon the international community, including member states and UN institutions to ensure that the ongoing international justice processes are advanced to address the protracted humanitarian crisis.

Five years ago, as the Rohingya were expelled from their homes, they were subjected to mass atrocities, including murder, rape, and arson at the hands of Myanmar’s military forces. As a result, over 900,000 Rohingya (including those arriving before and since the 2017 ‘clearance operations’) are currently living in the congested camps in Cox’s Bazar, Bangladesh in extremely difficult circumstances, completely dependent on aid and vulnerable to natural disasters, disease, and human trafficking.

As levels of insecurity and tensions within the community living in the camps continue to rise, the root causes of their plight in Myanmar have not yet been addressed and their future remains uncertain. It is imperative that the international justice efforts are strengthened and that the plight of the Rohingya is not forgotten. Without justice and accountability, it will not be possible for the Rohingya to safely return to their homes in Myanmar.

There are multiple ongoing international justice efforts to address international crimes and serious human rights violations perpetrated against the Rohingya in Myanmar. These include the investigation by the Office of the Prosecutor of the International Criminal Court, proceedings before the International Court of Justice (ICJ) on the Application of the Convention on the Prevention and Punishment of the Crime of Genocide (The Gambia v Myanmar), the work of the Independent Investigative Mechanism on Myanmar and an investigation under the principle of universal jurisdiction authorized by an Argentinian appeals court.

These proceedings have taken on even greater symbolic importance since the February 2021 military coup d’état – and are critical in ending military impunity in Myanmar for serious violations of human rights and international crimes.

“These processes are fundamental to long-term resolution of the Rohingya crisis – without justice and accountability for international crimes and serious human rights violations, the safe and voluntary return of the Rohingya to Myanmar is impossible,” says Antonia Mulvey, Executive Director of Legal Action Worldwide (LAW).

LAW continues to support the meaningful participation of Rohingya refugees in these ongoing international justice proceedings, representing over 300 clients in their search for justice and assisting hundreds more. Notably, LAW work with Shanti Mohila (‘Peace Women’), a network of over 400 Rohingya women several of whom are survivors of severe sexual violence and are leading the fight for justice by contributing to the proceedings, overcoming the stigma associated with victimhood.

The accountability and justice processes remain the effective tools to address the culture of impunity in Myanmar. Not only are these processes vital to the satisfactory resolution of the Rohingya crisis, but for the future of Myanmar as a whole.

LAW is an independent, non-profit organisation of human rights lawyers and jurists working in fragile and conflict affected areas. LAW provides legal aid to victims and communities that have suffered human rights violations and abuses in Africa, the Middle East, and South Asia.