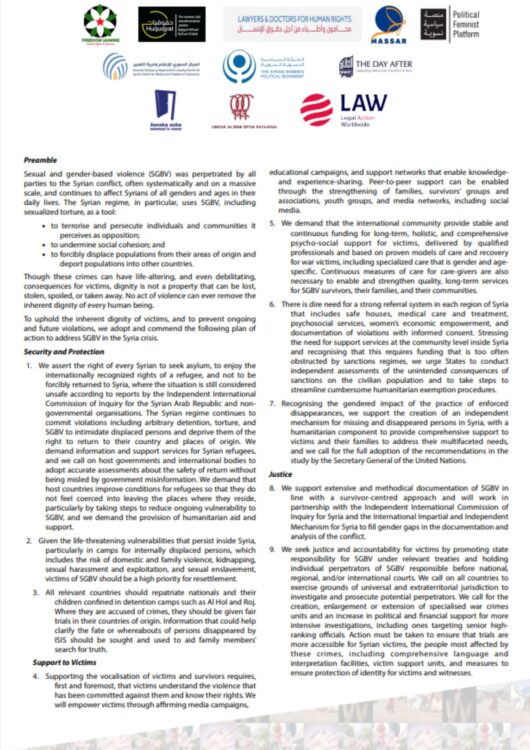 Today marks the launch of a 13-Point Action Plan to address sexual and gender-based violence in the Syria crisis. The civil society-led initiative, which identifies the action needed to respond to the complex and multi-faceted needs of SGBV survivors, was launched by 16 Syrian civil society organizations, leading activists and human rights defenders, and international allies.

The launch of the Action Plan reinforces the Syrian-led response to gendered crimes and violations as the crisis moves into its twelfth year. It breaks new ground in tackling the silence and taboo around SGBV, calling attention to the linkages between SGBV and other widespread crimes such as enforced disappearances, and addressing the devastating impact of SGBV for victims and survivors, their families, and their communities.

The signatories to the Action Plan emphasize that SGBV was perpetrated by all parties to the Syrian conflict, often systematically and on a massive scale, and continues to affect Syrians of all genders and ages in their daily lives. It is used by the Syrian government, in particular, to terrorise individuals and communities perceived as opposition, to undermine social cohesion, and to displace populations and deport them into other countries.

In response, the 16 signatories to the Plan have launched an effective platform for survivor-centred services, advocacy and justice. They have established clear priorities for meeting survivors’ immediate needs, including the creation of a strong referral and support system inside Syria and long-term psychosocial support for victims and their families based on proven models of care for war victims. The Plan sets out an alternative vision for peace and reconstruction in Syria based on inclusivity and a gender competent legal framework. It also proposes new and innovative mechanisms for supporting survivors to reclaim agency over their own narratives and experiences, such as People’s Tribunals and feminist advocacy and empowerment in the form of Women’s Courts.

The Action Plan is the result of the second annual conference on Supporting a Survivor-led Justice Movement in Syria, hosted by Legal Action Worldwide and funded by the European Union. The conference, which was held in Paris in October 2022, brought together 44 Syrian survivors and international allies, from human rights defenders and women’s rights organisations, to survivors’ groups and detainee networks.